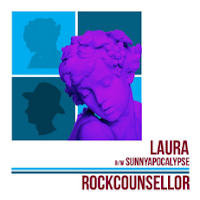 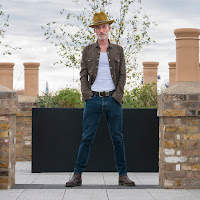 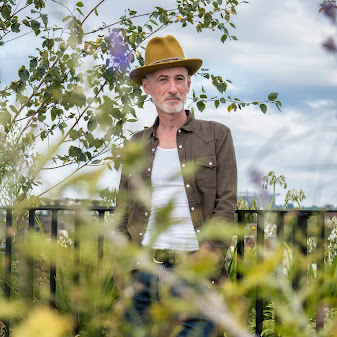 ...the sound of a man afraid to stop doing the thing that he's been doing since he was a boy. I can't stop. I'm not sure who I'd be if I wasn’t writing songs. They are my self-therapy. My rock counselling. All the songs I have ever written are curated journal entries that are now scattered around out there in various forms - on old cassettes, CDs, DAT tapes, reels, computer files and vinyl records.

Some of these songs endure for a few people, and many disappear, forgotten by the musicians that performed and recorded them, and by the people that heard them live. I have a daughter who will inherit my notebooks and recordings. The rock dream is to leave a legacy, isn’t it? Mine will be left with her to peruse, play and display, or destroy.

Who inspired you to make music in general ...and especially to the song "Laura"?

It was no one specifically. I sang a lot as a little boy, to myself at home and around school. Maybe I found it comforting. I still do it. Every day.
I started writing my own lyrics and then felt the need to put them to music. I wasn’t a good footballer at school, and I wanted to be different. Or I felt like I was. I’m not sure which. Anyway, one day I picked up my sister’s guitar and tried to teach myself to play it.
Laura is a song about one of the first ‘proper’ songs I wrote called 'Ship in the Night' that was inspired by walking home from school with a female friend.
We’d spend ages getting home cos we stopped so frequently to talk. She desperately wanted romance and couldn't find it. Many years later I found myself wondering if she had ever found it, so I wrote another song about her. I hope she’s happy wherever she is.

The song creates an amazing Indie Rock meets Post-Punk meets New Wave feeling, are those your favourite Genres of music?

Thanks. I grew up in the 80s, which as you know was an incredible era for music. Beginning with new wave and post-punk, and ending with indie dance and rave in the UK, and in the US the bands that seeded the lo-fi and grunge movements of the early 90s. I drank a lot of that in.

I write music on guitar and piano. I'm pretty rubbish at the piano cos I'm self-taught and I've never had to play it live, but it’s a great song writing tool and learning it has taught me so much about music theory that I didn't ever pick up learning the guitar, so I'm glad I have that option.
Thankfully, my collaborator Richard can play the piano well, so he steps in whenever necessary or we tidy up my blunders with Logic. I prefer to write the words first, but usually as soon as I have some of the lyrics and a vocal melody or rhythm, I begin to add the music.

Richard, my collaborator, and I have developed a pattern of working now after over 3 years. It has always been based on a combination of financial budget and attention to detail. After about three days in the studio the songs we produce are often ready to go.

Do you remember your first ever self written song?

I started by just writing lyrics at about 12/13 years of age, cos although I sang a lot, I wasn't a musical child per se, They were mostly punk songs with an end of the world theme inspired by talk at the time of an impending nuclear holocaust. I can’t remember the first of these but I have a bunch of those handwritten songs stored away.
I first picked up a guitar - my sister's Spanish guitar - after watching David Sylvian perform an acoustic version of ‘Ghosts’ on TV. When the show finished I went upstairs and began writing my first song. A rock ballad called ‘Lizard’.
Around the same time, one of my school friends played me his brother's Doors album and I became hooked on them, but especially Jim Morrison, so lyrically ‘Lizard’ was very Jim Morrison-esque, as the title suggests. It got its first public performance at a school music festival. I was gutted cos my music teacher said I couldn't sing. Maybe I’m still deluding myself.

What was the first ever Pop/Rock song you listened to?

I remember dancing to ‘Tiger Feet’ by Mud at a local disco. The first single my parents bought me was ‘Blue is the Colour’ by the Chelsea football team. Apparently, I would sing it around the house.
I was about 4 years old. The first single I asked them to buy me was ‘Billy, Don’t be a Hero’ by Paper Lace. The first pop I liked was Abba. I had a pre-teen of crush on Agnetha.
I’m not sure what the first new wave song I heard was, but ‘Oliver's Army’ by Elvis Costello sticks out as a song that I knew very well.
That also has an Abba vibe, of course. The first punk song I heard was ‘Oh, Bondage! Up Yours! by X-Ray Spex. That sent me in a whole new direction, as you might imagine.

These days, I’m happy in the studio. Live-wise, the best I could hope for was a band that played once in a blue moon in a small local venue.
It’s a lot of work getting that together, and I’m not sure I’ve got the energy for that. It can be a little soul-destroying out there if you're not young, arrogant and untouchable.

More writing and recording. Like I said earlier, I’m afraid of stopping. I do miss playing my songs live, so maybe one of these days I will find a way to do that. We’ll see.
Photo credits: David Barton