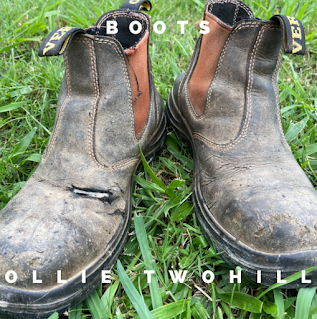 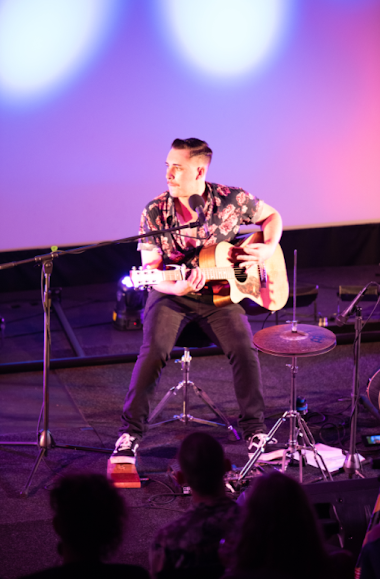 Ollie is a 22-year-old singer songwriter based in the lush Northern Rivers of NSW Australia, who plays guitar based melodic indie pop/rock tunes. Been described as “if Mumford & Sons had a gruffer edge & Passenger was blessed with an Australian twang, you would probably end up with Ollie Twohill”. Have been playing live at venues for the past 5 years after learning my chops street busking throughout the NSW Northern Rivers and southern Gold Coast. Music is his passion and life....... my parents said I could sing before I could talk!
In 2021/22 Ollie is looking to build his emerging career and play to existing and new audiences. Off the back of three single releases in "Tapping Away", "Stone Cold Killer" and "Mr Nightowl" , Ollie will be releasing 3 singles in the next 6 months commencing with "Boots" on 1 December 2021.
Ollie has drawn his musical influences from a wide genre that include John Mayer, John Butler, The Beatles and the Foo Fighters among many others.

Ollie Twohill is a singer songwriter who performs melodic guitar based acoustic heavy indie pop/rock. I am based on the Est Coast of Australia, in a town called Murwillumbah which is located between Byron Bay and the Gold Coast. Other I could sing before I could talk and in a music sense I have perfect pitch which means I can recognise the pitch of a note and be able to play it.

Who inspired you to make music in general? ...and especially to the song "Boots"?

My parents have always encouraged to play music. My Dad in particular, has quite a large collection of music that I grew up listening to. He also took me to music festivals from a young age. That was the basis of me wanting to be a musician from an early age. They made sure I had music, guitar, vocal and keyboard lessons to learn the craft over a 5 year period of weekly tuition.
In terms of “Boots” I have many half-written songs. I enrolled in an online song writing course which involved being assigned a topic/theme and you finishing off a song per week. This particular week The theme was actually titled “Boots” with the theme of turning up and doing the grind.
I improvised a little and thought about periods of my life that I had held myself back on not trying certain things. Things that you were always too afraid of trying, which I guess is common. So, I thought it would be good to write a song about it. Hopefully it inspires listeners to take the first steps in pursuing their dreams.

I generally write and arrange all my music in my bedroom. I come up with a guitar riff or progression and then frame the lyrics around that. I road test these songs at live gigs to see the reaction from an audience. I always have my songs 95% complete and road tested before I go into the studio.
I generally record batches of three songs at a time where I have a collaborative team of Producer / Mix Engineer Dylan J Smith and siblings Lawson (Bass) and Blair Hamilton (Drums) who are all based on the Gold Coast. We have a special chemistry that works well. They help create a distinctly original flavour to my music and are all great to work with.
For the mastering side of things, I generally use someone else who has set of fresh ears on the songs. In the case of “Boots” decided seek out New York based Mike Kalajian who operates the iconic Rogue Planet Mastering company. I’m really excited how all three songs come out particularly “Boots” .

I generally road test new songs over a 3 month period of playing live gigs. A combination of gut instinct and the audience reaction to them over that period is what I base my decision in shortlisting potential singles. By that stage the songs are generally written and arranged ready for recording. To date I have been recording a batch of 3 song s at a time in the studio to make the process cost and time efficient.

Nothing of any real note, watching endless hours of You Tube and eating takeaway food.

What was the first ever Pop/Rock/Folk... song you listened to or remember on?

John Butler’s “Zebra” was my first true love of a song that made me think I should be a musician. , but my Dads music collection included ACDC, John Butler, Jet, Dandy Warhols, Pixies etc

Both really. Live gigs for the interaction with the audience and the banter between us. Nothing beats the buzz of an engaged crowd. Even when there might me a handful in the audience. Whilst recording I’ve usually had the songs road tested live and send my demos to my session musicians and producer prior so we can and we usually knock over three songs

Do you remember your first ever Live Gig?

I certainly do, I was 15 and was in a packed venue in my hometown of Murwillumbah where several underage performers got to play 4 songs each. It was such a buzz and the audience was so supportive. The venue owner took a chance on putting on several artists who were all 15 and it worked out well for him and us. All the artists families and friends came along so the place was pumping that afternoon.

Playing live gigs as things open up with restrictions is the key focus. Being a one-man band at this stage helps me get gigs so I can recover my recording costs. I have two follow singles for release early next year called “Silk Dress” and “Neverland” Focus is on playing in the interim and having a rhythm section for “Neverland” is my main aim for April next year.