"Christmas in Dublin" by US4 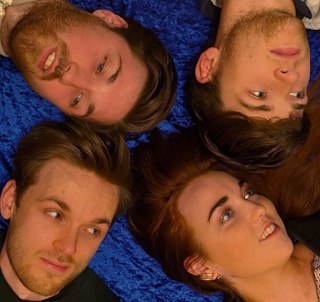 Us4 is an Irish pop/rock band of four siblings from Birmingham, featuring
Áine (lead vocals and tin whistle),
Brendan (guitars),
Cormac (drums, percussion and piano) and
Declan (fiddle) Healy.
Emanating from a rich musical background, Us4 is the triumphant culmination of a childhood of exposure to a vast and eclectic blend of music. A strong Irish heritage is evident in the unique and vibrant sound of Us4, as they seamlessly marry the driving rhythms of stadium rock acts with the beautiful melodic spirit of traditional Irish folk music.
Driven by their industrious DIY attitude and emphasis on self-production, this young four-piece’s distinctive sound draws influence from a plethora of wide-ranging musical artists. Hot on the heels of their well-received debut single, Christmas in Dublin represents this young band’s first venture into festive music.
Built on hypnotic Irish-flavoured pop/rock instrumentation, Christmas in Dublin is a cyclic journey through a multitude of emotions, contrasting feelings of hurt and longing against the joy and elation of this time of year. Sonically distinct from the plethora of existing festive music, this emotive track offers listeners a truly unique alternative to the catalogue of existing Christmas tunes. Us4 is like nothing you’ve never heard before: indie pop/rock with a signature Irish twist!
facebook     spotify     soundcloud     youtube     instagram

We really pride ourselves on our unique sound: an exciting and distinctive Irish-flavoured brand of indie pop/rock.

We grew up in a very musical family and we have strong roots in Irish folk music. All of our grandparents came from very musical families in Ireland and, as with all great traditional music, those talents are passed down through the generations. Our mother, like her father, was a fantastic button accordion player and she was the real driving force behind the realisation of our own musical exploits. We’ve combined this foundation in traditional Irish folk music with a plethora of other musical influences.
We’ve always been massive U2 fans, with their work serving as huge inspiration for our own song-writing. Whilst we all share common musical interests, we each have our own tastes that influence our individual contributions to the Us4 sound. For example, Áine loves big modern pop like Taylor Swift and Ed Sheeran, while Brendan really enjoys Noel Gallagher’s work with the High Flying Birds and Cormac is a big fan of early Coldplay records, with Declan really into modern indie rock acts like Sam Fender. We feel that this distinct blend of eclectic musical influences is really evident in our unique sound.

...and especially to the song "Christmas in Dublin"?

This song was actually written in 2015 when we were all teenagers. This year we revisited the old multitrack and re-recorded several elements, as well as adding multiple new layers and parts as we refined the Christmas sound we were aiming for.
The keyboards and bells loops that really drive the festive feel of the track were recorded and programmed by drummer Cormac back in 2015 and are such an integral part of the final version we’ve just released. Lyrically, Christmas in Dublin was written by Áine at a time when she was away from home for the first time at university. She says “I wanted to capture the blend of excitement at discovering a new place with the sadness and longing of separation for the past and memories of home. I paralleled this with the feeling that young people in Ireland must have had in the 1950s and 60s, leaving home to work in other cities and sometimes even countries.
In my English degree at the time I was studying old English poetry which is where the alliterative pattern of the verses is derived from, and also the creation of a strong and evocative sense of place was something I was exploring in my creative writing modules. Hence, the lyrics of Christmas in Dublin were born.” We mirrored these ideas musically in the hypnotic and cyclic nature of the repeating chord progression that drives the musical foundation of the song.

Our songs can originate from anywhere, although we tend to start with a musical idea and Áine will add lyrics around the melody and chord sequences that we’ve come up with. Musically, we often build upwards from an initial idea, be that a short melody idea from Cormac or a more substantial chord structure from Brendan.
We can then start to mould everything else from and layer guitars and fiddle parts as we see fit. We usually record all the backing tracks to a scratch vocal

We’re a completely DIY band where, aside from the mastering which is done by the great Pete Maher (U2, The Killers, Depeche Mode), we do everything ourselves.
From production to mixing to photography to single artwork to music videos, we try and stay true to that DIY essence as much as possible and we believe this results in the most authentic representation of the band we want to be.

As eluded to earlier, we grew up listening to U2 and the first record we all have some kind of memory of is probably their brilliant album How To Dismantle An Atomic Bomb, with our personal highlights including Miracle Drug and City of Blinding Lights.

We love both! We really enjoy the whole creative process of nurturing a song in our home studio setting but, coming from an Irish music background where any family gathering is an excuse for live music, we really enjoy entertaining others with music and song in a live environment.
Playing more live gigs is definitely on our to-do list for 2022.

The very first beginning of Us4 was when we were much younger and we basically started the band as part of a game we were playing. As we essentially couldn’t really play our chosen instruments at that point, we were really struggling to come up with anything resembling a song.
Then, out of nowhere, we knocked together a melody and some lyrics and formed a song called Catch Me. It even included an unwitting time signature shift in the verses! Who knows, we might dust it off and rework it some time…

How would you describe the year 2021?

2021, particularly the last few months, have been massive for us as a band. We finally recorded and released our debut single Tears of a Clown in November and we’ve quickly followed that up with our Christmas single Christmas in Dublin.
It’s been great to finally get our original music out there and have been delighted with the wonderful response we’ve had so far.

In the near future, keep an eye out for the official music video for Christmas in Dublin, which will be coming out very soon.
Then, looking ahead to next year, we hope to continue releasing original music regularly and seeing how we can develop our current sound even further so make sure you’re following all our social media channels to keep up to date!