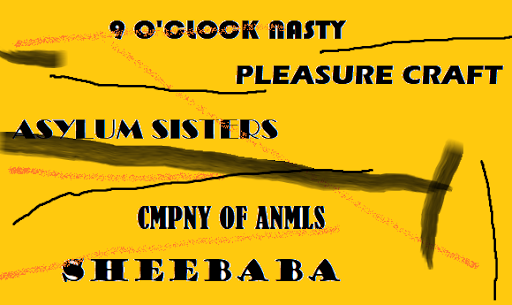 Release Date: 24/12/21 - Instagram
Location: Australia, Melbourne
Asylum Sisters duo Caitlin Cunningham and Martin Pike are back launching a club heavy acid techno single called 1800-PARANOIA. A hard-hitting infusion of what the Melbourne band is known for... techno beats vs Nu-metal. The track is inspired by “modern age app love, chemical romance, and your crush ghosting you."

Release Date: 08/01/22 - Instagram
Location: United Kingdom, Leicester
9 o’clock Nasty formed in 2021 from the ruined fragments and broken dreams of other bands that went before. They are the world’s first Anti-Ga group, left-field, eager to please and driven to delight and perplex in equal measure. They narrate their grinding creative process from www.9nasty.com and are probably going to play at a venue near you one day. They are based in Leicester, UK.

CMPNY OF ANMLS - "Over Now"

Release Date: 07/01/22 - Instagram
Location: United States, Lakeland
Formed in Lakeland, Florida in 2019, CMPNY of ANMLS consists of William Wiltshire, Derrick Dietrich, Jason Jolin, Andy Kempt, and Chris Harry. CoA plays on psychedelic and cerebral themes. Their music is that of a supernatural motion picture. The soundtrack of a drive through a lonely field at dawn or along the coast as the light melts into the water. CoA has been described as an amalgamation of Radiohead, Pink Floyd, and The Cure. A slowchedelic and polyamorous relationship of influences.

Release Date: 14/01/22 - Instagram
Location: Canada, Toronto
Pleasure Craft is the performance moniker of Toronto-based multi-instrumentalist, songwriter and producer Sam Lewis. In both theory and practice, Pleasure Craft is a blackboard on which Lewis chalks, erases, and chalks again.