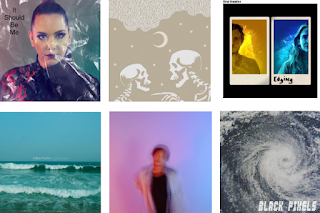 MOCK DEER - "Contempt For Others"

Mock Deer (Ricky Damiani) is a singer and songwriter based in London. A self-taught musician with a unique playing and writing style, he has spent the majority of his life in the North of England and has re-immersed himself in the capital’s Alt-folk scene over recent years, playing shows for many of the best local promoters as well as touring both in the UK, Europe and Canada.

JULIE HICKLIN is a London based Singer/Songwriter with a gift for top line melody and hook lines.
Julie’s voice is a sensual, versatile partner for many genres including Electronic Pop, Breaks, Trip-hop, Drum & Bass and EDM.

South London garage rock duo, First Frontier, make spirited, upbeat music to move to and be moved by. They have unleashed the frenzy of their energetic rhythms and soul-searching, upbeat lyrics on audiences since 2019.
Their captivating music blends broad influences and passes the resulting tunes through a garage rock filter. First Frontier choose hope over fear and play over fight.

Multicultural poet and musician Robert Kuhn was born in Houston, Texas and moved back in 2010 after bouncing around the world for twelve years.
Texas, New York, Pennsylvania, Australia, Chile, Colombia, Costa Rica and Nicaragua all played home for him as different doors, jobs, occupations and art forms opened and led him on from an Academic All-American Line Backer to a vagabond fisherman farmer writing the critically acclaimed songs he has carried throughout the Americas.

Amber Wilson is a producer and recording artist hailing from Houston, Texas.  She discovered a passion and natural talent for music when she was only thirteen years of age. From that moment on, she taught herself piano, guitar, and music production and honed and developed her craft over time.