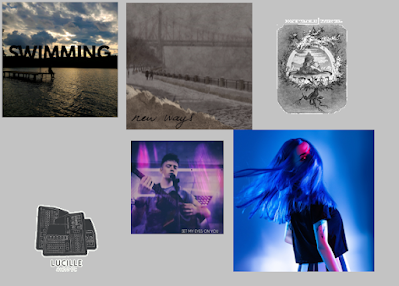 Cooney Thatcher's name is derived from the matronymic names of his family which would otherwise have been lost to the patrilineal surname tradition of his culture. In his music, he strives to achieve the same; salvaging forgotten ancestry and highlighting the path from history to a living, growing, creative presence.

Their consecutive singles range from bedroom-pop to alt-folk, melding narrative-driven lyrics with vibrantly textured production. Nick Louis is a multi-instrumental singer/songwriter with a unique ability to blend cross-genre sounds, lovely melodies, catchy hooks, and emotive vocals.  Warren LaSota is an architect, multi-media artist, and musician with a penchant for weaving lyrical narratives and translating soundscape to visual medium.

Prints of Monaco is a 4 piece NYC based indie rock band led by Oliver. They play sadboysongs. Their writing style strives for poignancy and catharsis. They use synths, guitars, drums, bass, and other sounds in this pursuit. They have three songs out so far, and will be releasing more this year.

Yulia Ehwaz is an alternative artist from the lost and forgotten region where Instagram music is still not available. She’s influenced by synthwave/alternative R&B/pop-punk music. Yulia says that the most important thing in music is a catchy melody and uniqueness of the sound.

EOIN DEVEREUX - "Set My Eyes On You"

Eoin Devereux is an artist born in Wexford, Ireland. He began writing songs at 16 and slowly over time began to improve at it. 'Going My Own Way' being his first release. It is a song which pretty much sums up his decision to become an artist, to go his own way.
He then released 'Fall and save' and then 'Falling Apart'. Both songs with a more outward look rather than looking in. The events that we have seen in the past few years have really inspired some of his music, he said.

Born and raised in rural Poland, Patryk spent most of his life listening to music which served him as an escape from the forests and the lakes that he once thought were going to be his only home. At 19 years old, he moved to the UK where he decided to settle down.
A few years later, he started learning music production which allowed him to turn melodies and lyrics he would make up in his head into demos he would publish on SoundCloud. In early 2021, he met Kevin Buster who produced his debut single.
facebook   twitter   spotify   instagram
NenesButler presents - Music Blog - Submit your Music