"No Return" by Firebug 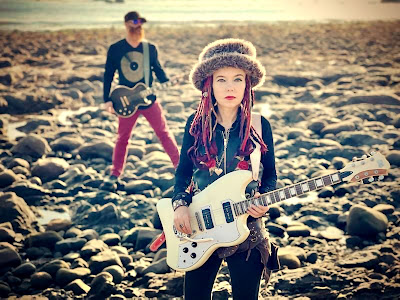 Joshua Tree California recording artist FireBug have captivated audiences at music venues and festivals across the globe. Performances in North America that include appearances at SXSW Austin, CMJ New York City and many others.
In Europe FireBug has played many venues and festivals including a memorable performance at the sold out Sonisphere Festival Knebworth UK and at famous venues such as Camden's Dublin Castle in London.
Sharing the stage with Iggy Pop , The Cult, Tom Morello (Rage Against The Machine), Dave Catching (Eagles Of Death Metal) and many other known acts throughout the world. Their signature sound blends modern rock with a New Orleans influence mixed with modern folk and blues.
Firebug music.com   facebook   twitter   spotify   soundcloud
bandcamp   youtube   instagram   songkick

Who inspired you to make music in general and especially to your new track "No return"?

Juliette: My first influence was Jimi Hendrix. From there my influences branched out to include The Rolling Stones Cream Led Zeppelin Aretha Franklin Sandy Denny David Bowie Beck The Verve Delta Blues artists like RL Burnside Otis Rush Wilie Dixon Muddy Waters and many others.
"No Return" was not inspired by any specific influence. The song came about as a result of letting my imagination run and not trying to reach for anything in particular.
Jules: I grew up influenced by mostly British bands from Led Zeppelin to Radiohead. When I met Juliette I was drawn more to the Blues and blues influenced classic rock bands.

"No return" will definitely be a great live song, any plans/dates to be back on stage?

Juliette/Jules: We really love to perform "No Return" with our full band! We hope to add more tour dates in 2022. Right now we are mostly performing locally in and around L.A. , the Coachella Valley and Joshua Tree California where we are based.

Juliette: I have no specific process. I just go with the flow of ideas as they come. Sometimes it's spontaneous and at other times it's a series of incremental thoughts and ideas that come about as time goes on.
Jules: I have no specific process. Sometimes I will come up with an idea on acoustic guitar and then build the song with other instruments.etc I love working with melody and try to take in as much as I can from listening to great productions and artists/bands that push the envelope.

Juliette: Web development and coding something I picked up about 6 years ago and hugging our dog Virgil :))
Jules: I have been told that I am a good chef. I can create some fantastic dishes and allows me to tap into my creative just like music .

Juliette: An intense roller coaster ride with many ups and downs.
Jules: I am glad it's behind us too much distraction and uncertainty thrown upon us all. Good riddens!

Juliette: That's a tough choice but if I had to choose I would say a studio session because that is where the creative process comes to fruition.
Jules: I prefer live because I am a spontaneous musician and love feeding off of a great audience!

Juliette: I can't say that I do, but I can say that it was likely the result of me sitting down with a guitar and a notepad to jot down lyrics.
Jules: Yes it was in college that I wrote my first song. We did perform it live in my first band in Isla Vista when I went to UCSB Santa Barbara and became a Del Playa party favorite called "Bizarre". It was very proggie!

Juliette: Releasing our next full length album Spring 2022 and getting our music out into the world!
Jules: Really excited about our new album coming Spring 2022. We put so much into this record and it sounds amazing! I hope we can tour with our full band this year and head over to Europe too!