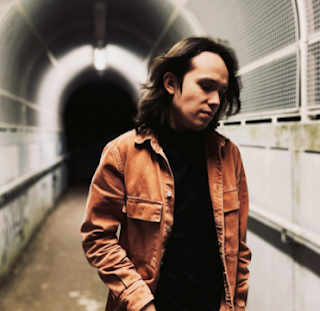 A singer/songwriter, producer and multi-instrumentalist. I also recently became a Twitch partner where I stream music four days a week! Come join it's a lot of fun!
I'm also part of a band called Plastic Sun! Things got put on hold a bit when COVID hit with that project but we hope to pick things up soon so you should definitely follow us on Spotify and stuff! I'm also really proud of the music we've put out so far as a band!
My general mission statement as an artist is to explore music as freely as possible whilst still keeping things accessible for people! All of my favourite musicians managed to tether this line and it's one I enjoy walking as well.
twitter     spotify     instagram     twitch

Some days ago we have had the chance to give his latest release "10-2-1" a listen. Now we are able to present him in a short interview. Read something about his inspiration, his talent besides music or how it was to work with Delta Crab. Here is Joshua Woo, thanks for your time!

Who inspired you to make music in general and especially to your song "10-2-1''?

Initially it was David Bowie. I was thinking how he writes little fictional stories and it's something I've never really tried and wanted to. So this song ended up a lot less personal than my songs usually do. It ended up being a story about being the last person on Earth after everyone has been evacuated due to the effects of climate change.
Musically I wasn't consciously inspired by anyone in particular. A lot of people have said it sounds a bit MGMT, Radiohead or Trip Hop like! But I was more inspired by looping and messing around on Ableton. It's kind of the first song I've wrote where I started from the production, instead of starting from the song. So that was really interesting to explore.

I've read Delta Crab provided some synth work, how was it to work with him?

It was awesome! Met him through twitch and I saw him doing all this awesome stuff with samplers and synths. I was having a bit of a tough time finishing 10-2-1. I felt like it was missing something. So I asked Delta if he would be up for providing some spacey synths on the track and he absolutely delivered! So much in fact that I rewrote an entire middle 8 section around what he had created!

Written, produced, mixed and mastered by yourself, how much time did you spend on the Mix/Mastering part?

That's hard to say honestly! The mixing part was very broken up. So I started the track last year but I kind of just left it for a good long while. Then I came back to it and finished the song. Then I left it again. Then I came back to it and changed it quite significantly.
It's gone through quite a few iterations until I ended up with the final product. However a lot of that time I wasn't really working on the song just more letting it sit. Although I do think that's an important part of the creative process sometimes.
Just stepping away from something until you are in the right moment and have the knowledge you need to complete it. Sometimes you have to live life and learn a few more things before you're at that stage if that makes sense.

When do you say/decide that a song is ready to go (for a release)?

It's really just a feeling. I try to avoid perfectionism the best I can. When the vibe is right I'll say to myself 'okay this is done, I can let go of it now'. The good thing about the modern age and being independent is I could at some point decide to revisit anyone of these songs and make tweaks and release it again.
Not saying I'll do that but it's not out of the question. I do believe music should be in the moment though and that imperfections are part of what makes music great and human.

What is your creative process like and was it for this song different?

My process is quite improvised to be honest! I'll often just jam on whatever instrument is nearby until I come up with a song.
However for this song the instrument happened to Ableton itself so I ended up looping lots of different sounds and coming up with an atmosphere. I did after that transfer over to a guitar and write the rest of the song that way.

It's already the third single, when can we expect an album or an EP?

As things are right now singles seem to be best for how streaming services are set up. They push them algorithmically so for the time being I'm just going to be releasing a regular supply of singles and building things that way.
If inspiration hits I might write a set of songs as an EP or an album and stick it up on bandcamp or something for people to purchase. I've kind of done that for this release on a small level. If you go on my bandcamp you can get a three song bundle of 10-2-1, all of the songs lead into each other, so it's kind of like an EP.

I think I'm pretty good at recognising talent in other people. Which brings me on to giving a shout out to Emilia Lindhal for doing the artwork on this song. Amazing artist.

I think 2021 was a very uncertain year for many people.

I remember the vibe of it and some of the chords but I don't really remember how it goes unfortunately. I remember it was about dreaming or something.

I'm just aiming to keep releasing songs as regularly as I can whilst streaming for my community on twitch (twitch.tv/joshuawoomusic btw)
NenesButler presents - Music Blog - Submit your Music